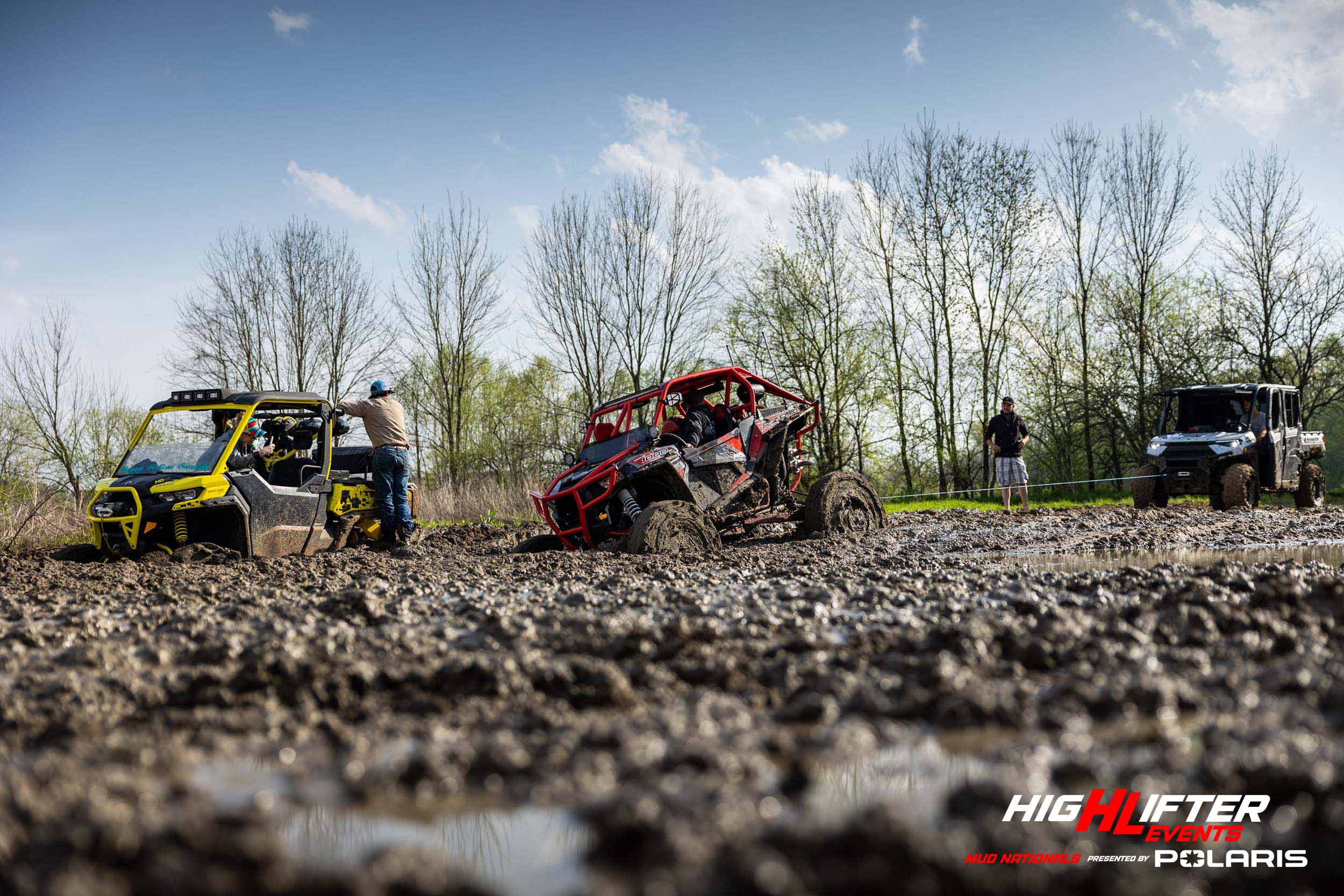 Life has a funny way of balancing itself. For every action, there’s a reaction. And when you need it the most, there’s always an opportunity to take advantage of pure, unadulterated fun. If you want to smile and laugh like a kid, then turn back the clock and go play in the mud.

High Lifter Events has spent decades perfecting that very enabling idea. Get away from the stresses of life, grab some friends, bring your favorite toys, and thrash in the mud like the world isn’t watching. At first, High Lifter Mud Nationals was nothing more than that, a weekend getaway – but man it has grown. Eighteen years later, it’s the industry’s largest mud party, but it’s still about those same, simple fundamentals.

The 18th annual week-long event took place at Hillarosa ATV Park outside the quaint little town of Blevins, AR. JJ Bonner, owner of the park, and a massive team of High Lifter employees and volunteers turned the 2000 acres into a festival-like playground.

Travelers from all over the country arrived to ominous and down right scary looking skies on day one. They rolled in to the various campgrounds to see dozens of prepared vendors, food trailers, displayed vehicles and demo rides ready for the 8000+ people to storm the grounds. With rain on the horizon, some braced themselves for a downpour but many jumped at the opportunity for fresh muddy trails. A storm is not something to ruin this party, but rather enhance it. Storms bring rain, and rain brings mud. The skies dumped, but as if Mother Nature knew just the right amount to share, the clouds dissipated to expose beautiful blue skies and sunshine for the afternoon activities.

For four days straight, the front gate had a steady stream of campers, motorhomes, pickups, and even passenger cars with UTVs and ATVs in tow. They all had faces of excitement and anticipation, letting their inner child surface for just a few days. It was time to go outside and play!

The event has a massive schedule, offering activities for all ages morning, noon, and night. Day one started with an organized Poker Run, thanks to American Force Wheels & Baja Designs, and a good old fashioned Kick Off Party with a live performance by Tyler Kincheloe and a raging bonfire.

Music is key to this event, from live concerts on the Blackwood stage each and every night, to DJs out at Outlaw Island, to the heart pounding stereo systems of the UTVs rolling through it all. No matter when, no matter where, your ears were filled with the sounds of good times. There’s no shortage of personality and entertainment, but that’s why you’re here.

The park stays alive late into the night, or early morning however you look at it, but eventually there is a calm. Just like any playground, the peace and quiet is short lived. It represents a reset and refresh of a new day, to do it all over again.

As day two came alive, families from all walks of life were welcomed back into the vendor village, with prize wheels spinning and merchandise flying off the shelves. The warm sun lighting up a line at the front gate as far as the eye could see. It was clear the day would end in the same fashion of late night gatherings around the DJ and live entertainment on the stage, but in between was something brand new – some healthy competition. The beasts would hit the throttle with side-by-side mud drag racing action, and the beauties would hit the stage for their chance to adorn the Miss High Lifter 2021 crown. Where a first-to-the-finish line would determine the winner of the race event, a star studded panel of judges would have to decide which of ten beautiful contestants would be selected. The familiar faces of RJ Anderson, 4X4Barbie, Brandon Fox, and Maddie Wedeking were at the judges tables to announce Baylee Day would hold onto her title from 2020. Both events drew large animated crowds to cheer on the challengers. Winners prevailed, but no sore losers to be found. Everyone left with a smile on their faces, after all, that’s why they were here. Now it was time to celebrate.

The nightlife is what it is all about, again with friends and tunes as the focal points. From the glorious sound of Mae Estes on stage to the beats from the Outlaw Island DJ, the party seemed to be never ending. Outlaw Island was a remote destination with nothing but mud and water holes throughout. Bikes and buggies would cross the depths purely to put on a show of capability and cool factor. Essentially a slimy slick parking lot in the middle of nowhere. Smiles and stories are shared, laughs and beverages are devoured, and sleep deprived memories are made.

Friday morning came, for those out late started slow, but not so much for the continued line at the front gate. Now with the weekend in clear sight the masses really started to arrive, and just in time. The day had even more action in store for us, but weather was also going to play a part in the day. Another storm was making its way overhead, rain would essentially be on and off all day and night. Again, as if it was meant to be, we would see enough break at just the right times. A clearing for the Show ‘N Shine allowed just enough time to dry off the stunning builds and roll through the judging panel of RJ and Ronnie Anderson and the infamous Pro Armor Pete. These machines are the outcome of hard work, passion, creativity and a little blood, sweat, and tears along the way.

The sun would fade, but the party, and the clouds, would remain intact after dark. Adam Doleac and Chase Bryant would center stage for a monstrous crowd. The live show was just the beginning though, after the stage lights went soft, it was no doubt that Outlaw Island would once again fill with lights, sounds, filled ice chests, and even more machines. But tonight was different, there was a formal After Party sponsored by Gator Waders. Which means the fun could run deep into the night, no matter what the storm above had to say about it. In true Mud Nationals fashion, the threatening skies would hold out just long enough. As crowds were making their way back to camp the skies would unleash downpour, winds, lightning, and even tornado warnings. The mud found new life yet again.

Saturday, the main event day, opened with the amazing sight of sunshine and calm heavens above. The staff and crew went to work resolving the chaos the storm brought, but would have all the pieces back together in plenty of time for the “Battle of the Builds” Bounty Hole to kick off. These UTVS and ATVs are specialty built, designed with one purpose. This is the event that many came to see, as part of a series throughout the season, there were returning champions and rookie runners alike. The chance at $19,000 in cash egged on more than just the desire to finish, but the motivation to finish first. The course was built to eat these machines, and they did just that. Many did not finish the course, but everyone gave it their all. The sidelines were filled from start to finish, stacking as far back as you could imagine, just to get a glimpse of the action. As always, a winner is announced, the crowd cheers, carnage is assessed, and it’s time to move on. There is always next time.

Before the nightlife kicked off yet again, High Lifter Events had something new this year on the schedule. They brought intense high speed short course racing to the scene. Athletes from across the nation entered in at the chance to take top spot, originally as points of a race series, but a last minute change to a single bragging rights race. The course was definitely not groomed like a mainstream venue, but between that and the recent rains, it set the stage for some intense racing liveliness that bobbed and weaved through the trees and over the rolling grassy hills. Both N/A and Turbo class watched mishaps, mechanicals, and even some rollovers, but that’s racing! In the end, Colin Truett crossed the finish line first in N/A with Factory Polaris RZR athlete Ronnie Anderson right behind him. Turbo class saw some run away action in Can-Am’s Kyle Chaney, followed by Cross Kirchmeier. Ronnie ran both classes, and pulled off a 3rd place finish in his second race of the day. Racers and spectators alike walked away with a treat, high speed race format sprinkled in the schedule of chillin’ and cruisin’ the mud park. Win win!

The event as a whole is far more than just a schedule of events. This is truly a social scene, a destination to escape the workload and phone calls of the daily grind. The people come from all backgrounds to enjoy the common ground of what they love to do for fun. Even those that travel from the desert playground and fear a spot of mud on their possessions have fun like they’ve never had before, and would do it again. There’s something to be said to be able to find joy like we all did in our adolescent years, before life got real, before our phones and emails took over our lives, before we had to stop playing in the mud with our friends.

This is an event of epic proportions, if there’s ever a single event from the south worth getting it all muddy for, this is it. Get to Mud Nationals if you haven’t already, find some friends, grab the UTV, pack it full, and stay out later than mom and dad would want you to.